Of all the many things that can destroy a home in the United States, termites are top of the list. The damage caused by termites costs U.S. property owners more than all natural disasters: that's floods, fires, earthquakes, and hurricanes combined. And, the most destructive type of termite is classified as subterranean. These termites are most destructive because they are the sneakiest of all termites. When they come up from the ground to feed on a structure, they don't leave feces pellets on window sills, like drywood termites. Their excrement remains inside their tunnels and nest, allowing subterranean termites to feed on a structure for years without being detected. We recently covered all of the many ways subterranean termites can damage a home or business. In this article, we're going to take a look at their life cycle and glean some things that will help us in our efforts to detect these wood-destroying organisms before they cause irreparable damage. 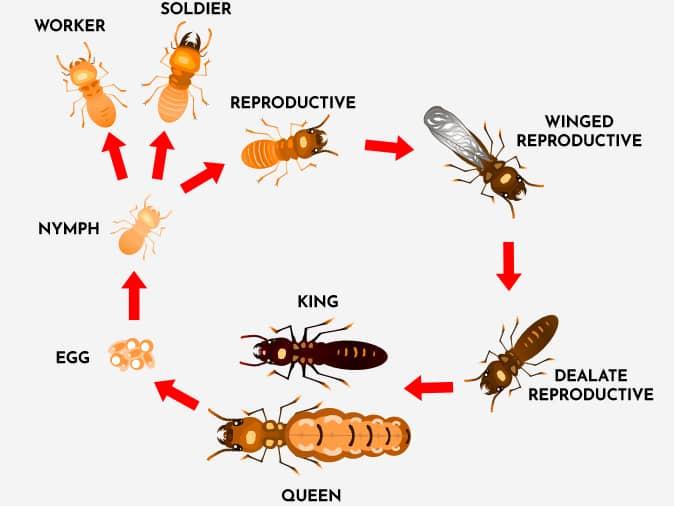 The queen of a subterranean termite colony is a proficient egg layer. She can live to be 25 years old and, in that time, lays as many as 2000 eggs a day. So, a single queen can lay as many as 18,250,000 eggs in her lifetime. But that's not the worst of it. Some colonies have more than one egg-laying female. That's some scary stuff.

Subterranean termite eggs are small, white (or brownish), translucent, and oval-shaped--not that you are likely to see them. The eggs that are laid by a queen will be deep in her nest, which may be 4 to 18 inches below the ground. If you uncover eggs, it is likely that your infestation is severe. While eggs don't damage the structure directly, if they are found near the surface of the ground or underneath a structure in your basement, shed, or outbuilding, it means the nest is right up close to your property. These eggs are likely to be grouped together in a clutch, and they will have a caviar appearance. You're also likely to see the big, fat queen right there with those eggs.

The incubation period for termites differs based on species and environmental conditions but it generally takes 1 to 2 weeks for an egg to hatch into a nymph. When a nymph hatches, it is soft, white, and translucent, with the characteristics of an insect: two antennae, six legs, and three body parts. Apart from being smaller than worker termites, they look the same.

A newly hatched nymph will go through a molting process and shed its skin continually until it develops into a worker. All termites begin as workers and later progress into other forms, as the queen directs, through the emission of pheromones. Pheromones are chemical scents that the queen uses for communication.

Nymphs are unable to feed, so they are not a threat to your property. They must rely on other termites to share food with them through a process called trophallaxis. Like eggs, you aren't likely to see nymphs unless you have a severe infestation. Nymphs stay close to the heart of a colony, awaiting to become worker termites. 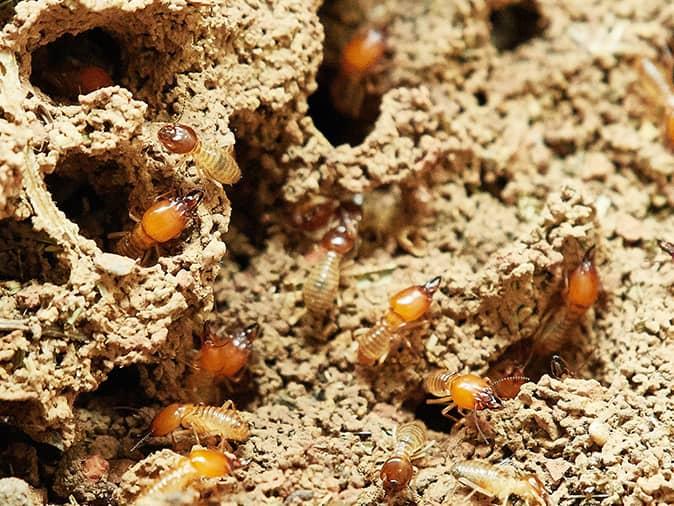 A worker termite is pale-white with a rounded head and straight antennae. It looks a little bit like a pale ant, but the waist does not have that ant-like pinch in it. If you uncover worker termites in the walls of your home, garage, shed, outbuilding, or other wooden structures, you can conclude that you have an infestation. But, the presence of termite workers does not mean you have a colony close to your home. Workers can travel as much as the distance of a football to acquire food.

Worker termites do not like the light. So, you aren't likely to see them unless you rip out a wall or a floor. Workers will feed on wood until they get to the paint and stop short of allowing the light into their tunnels. For this reason, you're going to see the damage they do, long before you see these insects.

Warning signs of termite worker activity in your home

Termites make a tasty snack for many predators. It is the role of the soldier termites to prevent this from happening. As needed, a termite queen directs worker termites to transform into soldiers. Soldiers are larger than workers and have a big distinct orange head with black pointed mandibles.

There are two main ways Soldiers protect their colony. They will attack predators using their powerful mandibles or they will use their big heads to plug tunnel holes, preventing predators from getting in.

While they are much less populous than workers and not directly responsible for termite damage, their larger size, distinct appearance, and tendency to guard entry/exit points to the nest makes them the most likely type of termite for most homeowners to come across in the event of an infestation. 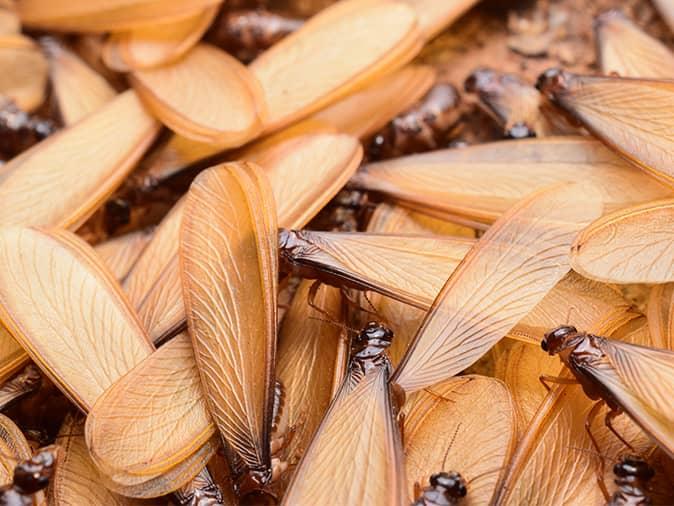 When it comes to protecting your home from termites, reproductives are the most important termite to recognize. Unlike other termites, reproductives (also called alates) love the light and the fresh air. They're not going to have a problem crawling around in places where you'll notice them. When you see them, be aware that it is usually a sign of a current infestation, not a pending one. Reproductives gather into swarms (usually in spring or summer) for only about 30 minutes before shedding their wings, mating, and establishing new nests. That means they are usually found close to the colony that sent them out.

Reproductives are black with long white wings that stack on top of each other. These wings hang well beyond the abdomen and are rounded at the tips.

Swarmers are often mistaken for winged ants, though they shouldn't be. These reproductive termites do not have the pinched waist of an ant and the wings of an ant have a cleft at the tips.

The best way to protect your home from termites

There are many warning signs that termites leave behind at every stage of their life cycle, but they are subtle signs at best. Most termites live in the ground or inside wood, and only come out in dark, moist locations. Swarmers are the only termites you're likely to ever see, and they only make an appearance for a few minutes. Year round prevention is the best way to safeguard your equity from these sneaky, destructive pests.

Starting at
$67/mo
Program Price Calculator
Move the slider left to right based on your homes sq foot size for an estimated cost for services.**
*some exclusions may apply
**Initial fees may apply
Request Inspection
or call now (732) 844-8640

‟I’m so happy we went with Arrow! We had been using another pest control company and still had a lot of spiders and crickets!! We switched to Arrow and after the first use with them, all the bugs were gone. They do a great job, very thorough, professional, friendly and very knowledgeable. I highly recommend using their services if you have any bug issues!”
Kathleen F.
Toms River, NJ
Arrow Pest Control received an average rating of 5.0 out of 5 stars from 1380 reviews. 5.0 Read Google Reviews