Have you seen what could be considered a "giant wasp" flying around in your yard? Have you seen piles of dirt near potted plants or along your walkway? Have you heard the death cries of Cicada bugs ringing in the air? You may have a cicada killer wasp problem or you may have an abundance of cicadas around your property. While these insects are not likely to sting there are some things every New Jersey homeowner should know in case they encounter these wasps. 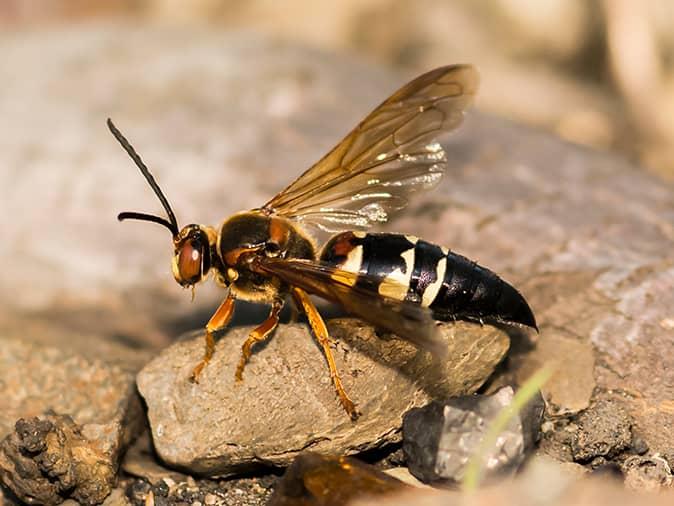 They aren't as scary as they sound

Sure, they have killer in their name. But they are only scary if you are a cicada bug. These wasps, almost exclusively, kill cicada bugs. In fact, they don't just kill them, they take great effort to bring those cicada bugs back to their tunnel chambers to feed their offspring.

They aren't as scary as they look

Sure, it is disturbing to have 2-inch wasps flying around in your backyard, but this wasp species isn't aggressive at all. They're not social wasps which gather into swarms to protect their nests. Cicada killer wasps keep to themselves. You don't have to worry about a few hundred 2-inch wasps pouring out of a nest to chase you across your yard.

That stinger isn't as scary as it looks

While many female insects keep the male around to help with the production of offspring, the females of this wasp species do not.

While they don't have the ability to sting, that doesn't keep the males from acting in an aggressive way when they perceive a threat. But they're all bark and no bite.

These wasps create a recognizable horseshoe shaped mound around their tunnels.

Cicada killer wasps prefer to make their homes in the ground

When they tunnel, they push the dirt up and out of their tunnels. Many consider the mounds of dirt produced by these wasps to be unsightly. And, for a 1 to 2 inch insect, they can push out a lot of dirt--as much as 100 cubic inches.

If established in the wrong areas, these tunnels can sever grass roots and cause turfgrass to become brown and die. Most of the time, they are actually beneficial to lawns by helping with aeration.

These wasps have a fondness for sandboxes

If you're seeing U-shaped mounds of dirt around tunnel holes in your sandbox, this should be addressed before an unwanted encounter with children can occur.

A "wasp on steroids'" appearance

A cicada killer wasp is black and pale yellow with red eyes and two prominent antennae on the front of its head. Its wings are a reddish brown and poke out from the sides of its back, up near its head.

They are sphecius grandis, sphecius hogardii, sphecius speciosus, and sphecius convallis. But, though there are four species, they all present the same problems to home and business owners.

Cicada killer wasps are one of the many insects that professional pest controllers inspect for and treat for. If you have ongoing pest service, it is likely that your cicada killer wasps issue will be addressed as standard practice. If you're in our New Jersey service area, the pest pros here at Arrow Pest Control can help you take care of that problem.

Service consists of the elimination of your current pest or rodent problem, complemented by both interior and exterior year-round protection of your home, which is inclusive of three seasonal visits. The program covers your entire property including attics, mailboxes, playsets, sheds, and fences.

Starting at
$37/mo
Program Price Calculator
Move the slider left to right based on your homes sq foot size for an estimated cost for services.**
*some exclusions may apply
**Initial fees may apply
Request Inspection
or call now (732) 844-8640

‟Recommended to us by neighbors, Arrow arrived promptly to treat our new to us home. The house is built on a slab which small ants love to nest in.

Their program is such that they return til the problem is solved. Today was their third visit. Steve was very thorough, professional and had a great sense of humor. I am hoping not to see him again this season! I would recommend based on our current relationship.
Like”
Mary F.
Lakewood, NJ
Arrow Pest Control received an average rating of 5.0 out of 5 stars from 1380 reviews. 5.0 Read Google Reviews