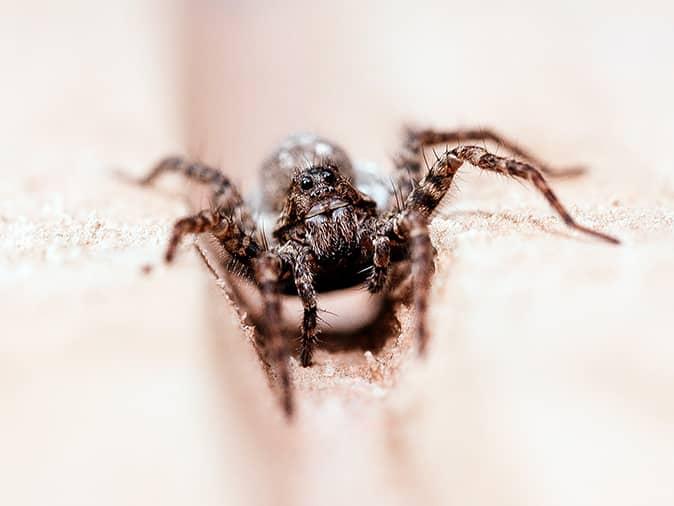 Adult wolf spiders have robust bodies that are covered in a layer of hair.  They also have eight long spiny legs, and three distinct rows of eyes- four small eyes on the bottom row, two large eyes in the middle, and two medium eyes on the top row. Wolf spiders are dark brown or black in color and may have yellow, gray or cream colored markings.

Female wolf spiders are larger than the males and adults usually grow to between 3/8th and 1 3/8th of an inch in length.

Though wolf spiders are venomous, their venom is usually not strong enough to harm people.  Also, they rarely bite making them less of a health threat.  Their quick movements, intimidating appearance, and name makes them seem scary but wolf spiders are more likely to scurry away quickly when they perceive a dangerous situation.

Why do I have a wolf spider problem?

Outside, wolf spiders often hide underneath of rocks, woodpiles, leaf and grass piles, and landscaping timbers.  They’re typically waiting for prey to wander by so that they can chase them down.  Wolf spiders don’t actively seek indoor shelter but if they find a way in, they often find they like the conditions and remain inside.  If a home has insects, wolf spiders will enjoy the hunt inside.

Can I control wolf spiders?

Controlling wolf spiders is difficult because they tend to hide in hard to reach areas of your home and have the ability to move very quickly, escaping your attempts to kill them with a shoe or whatever else is handy.   Our advice is to contact a pest control company that can help you reduce the insect population that attracts them, identify and seal off entry points, and treat as necessary.

At Arrow Pest Control, we’ve been helping New Jersey homeowners and businesses keep their properties pest free for over four decades. Contact us today to find out how our experienced pest control technicians can help you get rid of wolf spiders.

How do I make my property less attractive to wolf spiders?

There are several things you can do to help prevent wolf spiders from making their way inside.

‟All the professional qualities a business such as Arrow Pest Control would expect a service technician to exhibit, Brian, effortlessly presented. From my standpoint, he offered GOLD STAR ”
Deb C.
Jackson, NJ
Arrow Pest Control received an average rating of 5.0 out of 5 stars from 1272 reviews. 5.0 Read Google Reviews